Police get stabbed for stupidity

The police in this video paid a very high price for their lack of training and good tactics. Perhaps we can learn something at their expense. Take a look at the video and then tell me if I have missed anything in my list of goofs below.

Here's what I saw:


Did I missing anything?

Posted by Joel Persinger at 7:14 PM No comments: Links to this post

A Nation of Sissies

Nothing brings out the sissies like being injured. Whenever I have a martial arts related injury, the sissies seem to come out of the woodwork just to gawk at me with pained expressions on their faces and to say, “That looks like it really hurts.” I don’t mind when women do such things, but when men do it I begin to wonder about the state of manhood in this age. For the record, my wife is NEVER flustered by my injuries and my daughter always thinks they’re cool. This just goes to show that many women are stronger souls than all of you sissified men out there.

So, what am I talking about? I broke some bones in my hand in a training accident a few months ago. I was attending a “Unity Gathering” of Filipino martial arts practitioners and their instructors. The event was the third or fourth of its kind and was designed to help bring the various Filipino martial arts families together. This is a big deal because Filipino martial arts groups have been deadly rivals as far back as anyone can remember. It was a terrific day, I learned a lot of great lessons and I made some great friends. The one thing I received that I was not planning on was a broken left hand.

The broken bone in my hand was a result of a full power stick strike during training. It was a complete accident and was treated as such. The Guru who injured me was quite humble about it and I just figured it was time to move on and get back to training. It should be said that I expect to get hurt during training. That’s why they call it fighting. When you’re practicing fighting, you sometimes get hurt.

As it turned out, my hand still worked well enough to continue training. I was still able to grasp my sticks and I was still able to use my left had as a “check hand” even though it was broken. So, we trained for the rest of the day and I put some ice on it whenever we took a break. Since the gathering was during the weekend, I called the doctor to make an appointment the following Monday.

The hand was indeed broken. It required two hours of surgery and a metal plate to reconstruct it. It’s been seven weeks since the surgery as of this writing and my hand is back to about 75% and will be 100% in another month or two. No harm, no foul. I just spar with my broken hand tucked into the back of my pants. This is 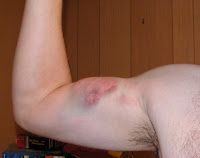 what I did this past Monday when Guru Greg Moody (one of the three elders in Cannibal Combat) and I traded sticks in my back yard. Greg is a touch fighter and a man whom I can truly call my brother in arms. Between Guru Greg and Guru Mike Ritz I found myself being hit quite a few times and left the day with a complete collection of bumps and bruises like the one on my right arm (Pictured here).

[by the way, this is nothing. Greg has more cuts, stabs and broken bones as a result of training and fighting than anyone I have ever known. Mike has quite a collection as well]

Two days later I went to the doctor for a check up on my hand. She noticed the bruising on my right bicep and said, “You need to get a new hobby.” I told her, “It’s not a hobby.” Later that day one of my employees came into my office. When he noticed the bruises he winced and said, “Why do you do that?” He went on to tell me that he didn’t like pain and could never imagine himself doing such things. I wish I could say that these responses are unusual, but they are not. These are the same types of responses I get every time I am injured.

People do not like the idea of experiencing anything that might be unpleasant and they simply do not see the value in the struggle of life. As a result, martial arts schools have dumbed down fighting by employing every kind of pad and protective gear they could possibly imagine and by turning every martial style into a point sparring sport. People won’t come if they think they might get hurt. But, they WILL pay to experience the thrill of fighting as long as there is no risk of pain or injury. That’s why most successful movies, TV shows and video games incorporate a large helping of violence.

This “risk free” thinking has gone well beyond the training of men to fight. It has become part of our every day existence. Consequently, I have come to the conclusion that we live in a land of sissies. We want the government to feed us, protect us, pay our doctor bills and keep us comfortable in our old age. Like the employee who commented on my bruises, we don’t want to feel any pain. We would much rather plop on the couch and live our lives vicariously by watching the adventures and struggles of mythical characters from our safe position at the opposite end of a remote control. Well, my dear reader, not I! I’ll live my own adventures and fight through my own struggles, thank you. I’ll be responsible for myself, pay my own way, feed my own family and when trouble comes, if it does, I pray that God will be merciful to the one who brings that trouble to my door, because I won’t be.

Do you hear the call of Manhood as I hear it? If so, then I will leave you with the salute that Guru Greg Moody always gives before a fight, “Courage, Strength and Honor.”

Posted by Joel Persinger at 9:35 AM 2 comments: Links to this post 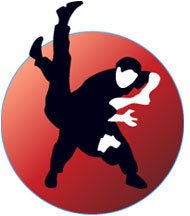